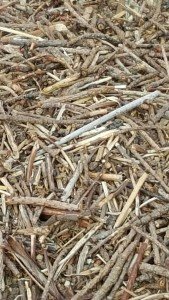 Most ants that invade homes are yellow, red, brown or black in color, constricted at the waist, and 1/8-1/4″ long. If you find ants that are larger than about 3/8″ (in the US) you’ve probably found carpenter ants. You may also occasionally see ants with wings (all species), these are the so called “reproductives”.

pavement ant Description: Pavement ants are reddish brown to black; workers are about 1/8 inch long. Pavement ants have the following characteristics: 1) petiole with two nodes, 2) head with furrows (lines) running vertically (top to bottom), and 3) a pair of spines on the posterior portion of the thorax [compare with acrobat ants].

pavement ant Mating swarms: May through July. When the nest is under a heated slab foundation, swarms can also occur indoors during winter.

pavement ant Management: Look for and treat outdoor nests. When the nest is not found, treat the building perimeter with a residual spray. When pavement ants are nesting under heated concrete slabs, baiting is the most effective control tactic. Use commercially available baits effective against grease-feeding ants.

Odorous house ant Foods: Sweets, especially honeydew, and insects. When honeydew is in short supply, odorous house ants can forage indoors for sweets and other foods, including meats.

Odorous house ant Nesting sites: In soil under stones, boards, patio blocks, mulching plastic, and nearly any other object laying on the ground. They can nest in homes in walls voids and under floors. Odorous house ants do not cause structural damage to buildings.

Odorous house ant Management: Check for outdoor nests, especially under stones, firewood, bricks, and other objects; treat any that are found. If nests are not located, treat the building perimeter with a residual spray. Use commercially available baits effective against sweet-feeding ants.

carpenter ant Description: Some species of carpenter ants are the largest ants in the north central states. They are black, or red and black; workers range in size from 3/16 to 1/2 inch. Colonies consist of major and minor workers. Carpenter ants have the following characteristics: 1) petiole with one node and 2) a thorax with an evenly rounded upper surface (workers only) [compare with field ants].

carpenter ant Foods: Other insects, both living and dead. They also feed on meats or sweets, including honeydew, syrup, honey, sugar, and jelly. Carpenter ants DO NOT eat wood; they chew wood into sawdust in the process of creating galleries and tunnels.

carpenter ant Nesting sites: All types of moist or rotting wood, including trees or tree stumps, indoors behind bathroom tiles; around tubs, sinks, showers, and dishwashers; under roofing, in attic beams, and under subfloor insulation; in hollow spaces such as doors, curtain rods, and wall voids; and in soft polystyrene and other forms of insulation. Carpenter ant tunnels are clean and smooth, making the wood appear that it has been sandpapered. In contrast, termite tunnels are not clean looking, but are packed with dirt like material.

carpenter ant Management: The best treatment is to apply an insecticide directly into the nest. It is also important to replace damaged or decayed wood, and if possible to eliminate any moisture problems. Baits may also be effective if applied where ant activity is seen.

cornfield ant Description: Cornfield ants are very abundant outdoors. They are light to dark brown; workers are about 1/10 inch long. Cornfield ants have the following characteristics: 1) petiole with one node, 2) thorax is uneven in profile (workers only), 3) relatively large eyes compared to head, and 4) first antennal segment (also called scape) is not considerably longer than head [compare with false honey ants].

cornfield ant Foods: Sweets, including honeydew (they are sometimes found feeding on honeydew from insects infesting houseplants) and live and dead insects.

cornfield ant Nesting sites: In soil, forming small craters, especially in lawns. They also nest in soil under stones, bricks, sidewalks and other concealed sites, as well as rotting logs and stumps. They rarely nest in homes.

cornfield ant Management: Check for and treat nests in the lawn and other nearby areas. If nests are not obvious, treat the building perimeter with a residual spray. Commercial baits available to the public may be effective.

Larger yellow ant Description: These ants give off a pleasant citronella or lemon smell when crushed. Yellow ants are yellowish to reddish brown; workers are about 3/16 inch long. Workers do not come indoors for food and are rarely seen. They are most commonly seen when the reproductives swarm in homes. Queens are about 5/16 inch long and often reddish and darker. Yellow ants have the following characteristics: 1) petiole with one node, 2) thorax is uneven in profile (workers only), and 3) compound eye is small in proportion to head.

Larger yellow ant Nesting sites: In soil under stones, logs, bricks, patio blocks, concrete and other concealed areas. They also can nest in rotting wood. Yellow ants can nest in and around foundation walls and in soil under buildings on slab construction. Workers may be seen throwing out dirt or cement particles, but they do not damage masonry or wood.

Larger yellow ant Management: Eliminate winged yellow ants by physical means, e.g. with a vacuum, or by hand. Large numbers can be treated with an application of an insecticide that is labeled for flying insects, such as pyrethrins; these products are found in aerosol ready to use containers. Detection of yellow ants nesting under concrete slabs is difficult and control is rarely practical or justified.

Pharaoh ants are an imported species, probably from the tropical regions of Africa. They have readily spread through the world along commerce routes. Although they can nest in any heated building in the north central states, Pharaoh ants are most commonly found in hospitals, nursing homes, schools, and apartments. Seeing persistent numbers of very small ants during winter suggests Pharaoh ants.

pharaoh ant Description: Pharaoh ants are light yellow to red with their thorax darker colored; workers are about 1/16 inch long. Pharaoh ants have the following characteristics: 1) petiole with two nodes, 2) thorax lacking spines, 3) 12 segmented antennae, 4) antennal club composed of 3 segments, and 5) normal sized compound eyes in proportion to the head [compare with thief ants]. It is best to have these ants identified by an expert.

pharaoh ant Foods: They feed on a wide variety of foods, especially those containing grease or fats. They also feed on many types of sweets, dead insects, toothpaste, soap and other foods that other ants rarely attack. They often seek out water in kitchens and bathrooms.

pharaoh ant Nesting sites: Pharaoh ants nest strictly indoors in the north central states; because of their tropical origins, they do not survive outdoors. They take advantage of their small size and nest in a wide variety of small spaces, cracks and crevices, including behind countertops, baseboards, in wall voids, and many other small voids. They often nest near dark, warm sites and near sources of moisture. Pharaoh ant nests are very difficult to find.

pharaoh ant Mating swarms: Pharaoh ants, unlike most ants, do not have a mating swarm but produce new nests through a process called budding. When the colony becomes too large or is under stress, a group of workers take brood (i.e. larvae and pupae) and move to a new site. One or more queens often go with them to the new nest.

Also referred to as grease ants, thief ants are the smallest household ants in the north central states. Thief ants are so named because of their habit of nesting near the nests of larger ants and stealing their larvae. They often have well defined trails.

Thief ant Description: Thief ants are easily confused with Pharaoh ants. Identification is very important before pest management steps are taken and it is best to have these ants identified by an expert. Thief ants are yellow to light brown; workers measure about 1/20 inch long. They have a tendency to curl up when they die. Thief ants have the following characteristics: 1) petiole with two nodes, 2) thorax lacking spines, 3) 10 segmented antennae, 4) antennal club composed of 2 segments, and 5) small compound eyes in proportion to their head [compare with Pharaoh ants].

Thief ant Foods: Prefer protein and greasy foods, such as meats, cheese and peanut butter, and nuts, but will also eat sweets. They are small enough to enter almost any type of food container.

Thief ant Nesting sites: Thief ants commonly nest in soil and rotting wood. They can nest indoors in small spaces, such as under countertops, in wall voids, cabinet voids, behind baseboards. Nests are often difficult to find.

Thief ant Management: Thief ants are especially common during mid to late summer when they enter homes from outside nests. Locating and treating nests is not practical. Treat the building perimeter when thief ants are foraging into buildings from outside nests. When nests are located indoors, baiting is the most effective management method. Use commercially available baits effective against grease-feeding ants.

Field ant Description: Field ants can easily be confused with carpenter ants but they are not as likely to forage indoors. They are black, brown, red, or combinations of these colors. Workers range in size from about 1/8 to 1/4 inch long. Colonies consist of major and minor workers. Field ants have the following characteristics: 1) petiole with one node, 2) thorax is uneven in profile (workers only), and 3) distinct simple eyes (ocelli) on top of its head.

Field ant Nesting sites: Build mounds in soil in exposed areas. Some species make extremely large mounds. They do not nest inside buildings.

Field ant Management: Look for and treat outdoor nests. Multiple treatments may be necessary. When the nest is not found, treat the building perimeter with a residual insecticide.

False honey ant Nesting sites: In soil in open, well shaded sites. Their nests are rarely concealed under logs, stones, etc. They do not nest indoors.

False honey ant Mating swarms: April through May. Sometimes they may also be found indoors during winter.

Acrobat ants get their name from their habit of holding their abdomen over their thorax, especially when they have been disturbed.

Acrobat ant Description: Acrobat ants range in color from yellow brown to black; workers are about 1/8 inch long. Acrobat ants have the following characteristics: 1) petiole with two nodes; the petiole is attached to the top of the abdomen, 2) head lacks distinctive furrows (lines), 3) a pair of spines on the posterior portion of the thorax, and 4) heart shaped abdomen [compare to pavement ants].

Acrobat ant Foods: A wide variety of food, including sweets, meats, and insects.

Acrobat ant Nesting sites: Dead or rotted wood, including logs, stumps, dead tree branches. They occasionally nest in soil under stones. Indoors they nest in wall voids and rotted wood, especially window frames. They do not cause structural damage to buildings.

Acrobat ant Management: Check for nests, especially in rotted wood. Remove and destroy infested wood when possible. Nests can also be treated with an appropriate insecticide (do not treat firewood). If the nest is not obvious, treat the building perimeter spray with a residual insecticide. For acrobat ants found indoors in voids, inject an insecticidal dust. When possible, replace rotted wood and correct moisture problems.